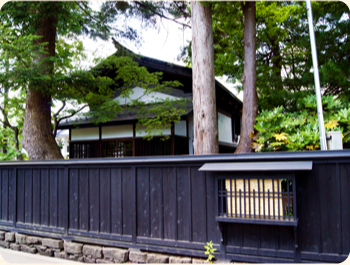 When Ashina (Ashina) house was the town building in 1620, the samurai residences group of inner-cho separately, you will be in the town of the south district "Tamachi" live the samurai of 80 flag. They were samurai I got a stipend from Akita feudal lord Ujinao Satake Minister.
1656 Satake north house is adapted to govern the Kakunodate, who moved up residence in the inner city, we are divided and those who receive a stipend from the Satake north house.

Tamachi samurai mansion, but it does not specify the country of preservation district, blackboard wall that remains from the old days, the cherry blossoms in spring, autumn leaves, it is worth seeing. 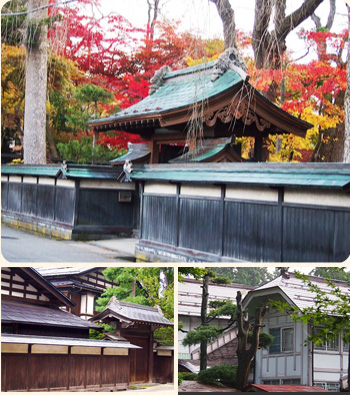 Spot people in the know

Kakunodate is famous samurai residences street of inner-cho, but Tamachi samurai mansion outside the town side is an interesting spot to people in the know.

Elephants also samurai houses five "Nishinomiya house", was built to pray for the founder of Shinchosha "Shintyosya Kinen Bungakukan","Ota house" of Tamachi, located in the Tamachishimocho building of "Shimoshin-cho Ota house." fun of, and will be felt indicating that a samurai residence as a "tree of fir", "Mon", "blackboard fence" and the like, the flow of the era from the Edo era to modern times.
Also in literary "Akutagawa winners birthplace of the mother of (Yojiro Ishizaka)"
"Akutagawa winners relation place of (Yuichi Takai)"
Episode that is intriguing, such as "birthplace of the ruble insect Symbol of the translator" is plenty. During a visit to Kakunodate, try to explore all means here.