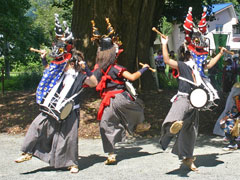 Sasara of Oyamada is Tozawa-based, but the lyrics are almost different.

In the 2nd year of Antei (1228), Kanemori Tozawa rebuilt Kadoya Castle and lived there, but he used to live in Kami-Hinokinai, and the lion dance also followed the valley with Mr. Tozawa and went south, and the festival of Kannon-do in Oyamada. The vassal was dancing. It is said that Zensuke Akakura of Oyamada in the 6th year of Keicho inherited the mystery of this sasara and danced as a private one at the festival every year.