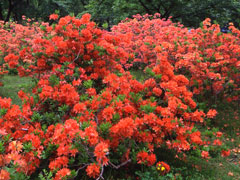 A small park overlooking the Obonai basin. It is a famous spot for the native Japanese azalea, which is said to have 10,000 stocks and 10,000 trees.

From mid-May to late May, which is the azalea season, the Obonai Park Azalea Festival is held, and during the period, nighttime illuminations are also held.