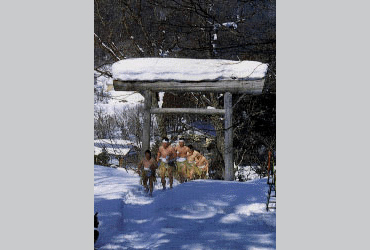 1872 May 10, years, lost the 14 buildings damaged dwelling house is in conjunction with pine needles, the intra-phase two villages by the Great Fire (there was a 15 units of the house at the time of pine needles), it subsided It was not until the evening. In order to protect the village from the calamity that repeated cause again fire in this year, to pray for no-fire to Konpira temple of Shikoku, Kimura received your room and a bill in the shape of Konpira temple. In the village, immediately built a shrine to Asahiyama in the center of the region, Hadakamairi of non-fire prayer came to be carried out every year in the lunar calendar January 10. 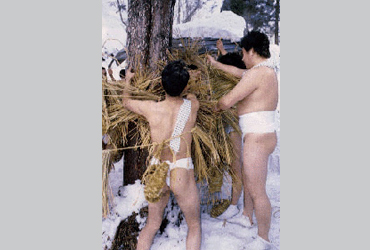 Young man who cleansed himself in the clear stream of cypress Uchikawa is, wearing a knitted in the straw "Kendai" (Koshimino) to the waist, runs the straw sandals to wear go out voice brave in the village in white socks. Receive a "candle" and "twisting first fruits" from the role how you are in the four corners of the way, climbing ran at once to Asahiyama, pray for no-fire to Konpira Palace, received a sacred sake After completion of the prayer, the waist and "Kendai" Yuwaetsuke the straw sandals that cut the tie to the sacred tree, and descent.
In the duty inn young people went back, and reports that it has completed the successful prayer raise your votive candle in the inner god. Then feast (feast) takes place.
You can participate in the Hadakamairi house, commonly called not less than one year to the "taboo" house. In addition, the house it is the women that are childbirth and pregnancy are excluded.

JR Kakunodate station Akita Nairikusen use than station, get off at Matsuba Station, a 5-minute walk (about 30 minutes)